Yesterday, I started and quit my commission faith study. I don’t know if I will go back this semester or not. We’ll see. Actually, I am just going to turn this into my September update post even though September ends in 5 days 🙂

So first things first, I got a job. Somebody shout Hallelujah! I’m really excited to have my first job in life and it’s a pretty fun job. I will be working as a community space monitor and an international community programmer on residence.aka planning events for international students. These past few weeks have been so frustrating sending out resume after resume with no acknowledgment, not even to let me know I had been rejected. I was really disappointed because I worked really hard and I prayed really hard yet I had absolutely nothing to show for it. In August, I borrowed my sister’s savings with the promise that I would pay her back in October because I was so sure that I would get a job but as the days went, my hope became dimmer. My criteria for my dream job was a sitting job because I can’t be standing for long so that ruled out mall jobs, retail, etc. However, when I became desperate, I also applied for jobs that I didn’t really like ie standing jobs because I just needed something to support myself but even those guys didn’t hire me.

That was disheartening but I thank God that they didn’t because now I get to have a job that I love and is convenient. Praise God and thank you so much St Josemaria. I am sorry that I lost confidence in your intercession. Thank you St Joseph, St Anthony, Mother Mary, St John Paul II and everyone who prayed for me. I really appreciate it ❤

Still, on the subject of disappointment and lost confidence, I would like to share the reason why I quit my commission faith study(It’s like an enhanced bible study..hence the name faith study) yesterday. There are 5 studies and commission is the fifth & final one. Some months back, A advised me to take commission just before graduating from SFU because it is kinda written to show you how to keep your faith in the world and workplace scenario. Then B said that the study is applicable to all situations so I signed up for it anyways.

In the morning, I woke up late (during my class) and I was really sad and pissed off because my personal goal is to attend every semester no matter how I feel. Then I checked my phone and saw that C had asked me to be her RCIA sponsor and I was like wow such a great honor, of course, I would love to so that cheered me up. I decided to get ready for the day and not miss my faith study since I had already missed my only class for the day. When I arrived, I was told that I am the only girl who agreed to take the study this semester.

I had two options, Join the guys already formed group and make it co-ed or take the study with D leading and no other group members. Then I flipped open the book to check out the content to know if I would be comfortable with sharing my answers with the guys. I looked at the first lesson and I saw the word ‘identity’. It took me back to the time that I had to give a share aka personal testimony about my experience with my identity at CFC-Youth year-end party and I was like ‘no way, no way I am telling that story again. But then D convinced me to try out lesson 1 and we can decide if I will continue or join the boy’s group. So I did and honestly lesson one was cool. It was asking about the church’s identity and not my personal identity so it wasn’t as deep as I thought it would be. I was like, not bad, I can do this 🙂

As a result, I decided to continue with the study and then D said that she would like to discuss something that happened last year concerning my application to do CCO Missions. (In my head, I was wondering how something that happened this year became ‘Last year”) I was like honestly, I don’t care anymore, let it go but she didn’t. Then D said how someone on the team didn’t think that I was a good fit because of my ‘negative attitudes toward evangelization’. I had never heard something as ridiculous at that in my life! Anyways in their opinion, everyone on the team had very positive attitude attitudes towards evangelization and I might influence them negatively. Lowkey, I was impressed that they felt that a small girl like me could have so much power, they were almost 40 people on mission but in reality, I was actually really pissed and hurt. I tried to laugh it off but then I remembered Sarah’s words about how not expressing my feelings would explode one day. So, I expressed my feelings, I told them to ask ** (who was at St Mary’s every Sunday this summer on my views are on evangelization) and I walked out.

I am not someone who does heart to heart talks especially when the other party has a formed judgment about me. I found it really ironic that within the span of a few hours, some who I met through evangelization had asked me to be her RCIA sponsor and someone else had said that I had very negative attitudes towards evangelization. As I express my feelings best through writing and I am too lazy to paraphrase, I will copy and paste the message that I sent via Facebook to D:

“I know that you decided to tell me what you said on Thursday with the best intentions and you felt you were doing so in my best interest. However, the worst possible thing anyone can ever do to me is talk negatively about me to someone else. That to me is worse than actually shooting me with a gun.

And I do realize that you didn’t make the statement so you might be upset that I decided to drop out of the study with you or *** but it basically seems to me that the whole of *** staff betrayed me so please don’t take it personally.

Like I said earlier, I am not mad that I didn’t get to go on mission, I didn’t care. I am just not someone who stands betrayal. How does someone make an assumption about me, make a decision and then decide that they want to talk about afterward? To me, it makes no sense.
If you had spoken to me before making the decision, my reaction would have been different because the betrayal won’t have been committed.

And honestly, previously I would have validated myself or tried to prove whoever said something about me wrong but I will not. Because all that matters is how God will judge me and not some human being. If you like, you can ask *** that you are doing a survey but I honestly don’t care. Like I said, I really am not mad but I won’t be continuing Commission this year because I don’t have trust in the team. I am sure that you can agree that if there’s no trust, a relationship cannot work.”

So that my friends is why I started and quit my commission faith study. And just to clarify, I will still be going to events and stuff. I just won’t be investing my time with them because I feel like they are judging me and believe me, I am insecure enough already.

On a happier note, I went to Vocations Fair on September 20 and it was so awesome 🙂 There was a Sister who told her conversion story and it was so interesting. She used to call the priest “an actor”, the congregation “audience”, mass “a free show” etc. before she understood what was going on. She’s hilarious. There were also various free resources 🙂 I felt like I was in a free Catholic bookstore 🙂 LOL. There were also great performances by the sisters. For more information on Vocations Fair, click here

All in all, September was a good month and I hope the coming months are even better! 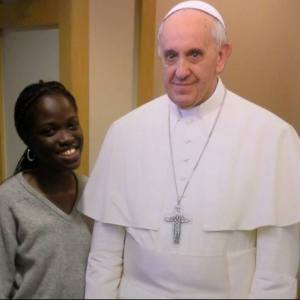 Hello, I am F.T....short for Fehintola. If I am asked to describe myself in three words, I will say that I am F.O.J- friendly, outgoing and joyful OR Fehintola Okunubi Josephine.